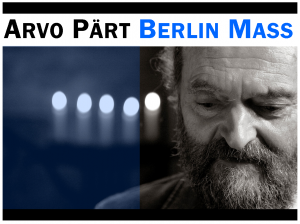 For Cantabile’s season ending, we will share the mystical music of Estonian composer Arvo Pärt. Following the inspiration gathered from Estonia’s fight for liberation from Soviet oppression with song as their sole weapon, we will recreate Pärt’s Berlin Mass, written in 1990, and revised in 2002. Pärt is Estonia’s foremost composer and one of the most important living composers in the world, and this music follows the traditional form of the Mass while expressing Pärt’s unique musical idiom that transcends analysis. This is truly meditative and uplifting music, written to commemorate the feast of the Holy Spirit, yet it is also music without religious affiliation. The composer describes his compositional technique, which he calls “tintinnabuli” (from the Latin, little bells), thus:

I have discovered that it is enough when a single note is beautifully played. This one note, or a silent beat, or a moment of silence, comforts me. I work with very few elements—with one voice, two voices. I build with primitive materials—with the triad, with one specific tonality. The three notes of a triad are like bells and that is why I call it tintinnabulation.

As in our previous two concerts of the season “Journeys in Belief”, Cantabile will also sing works from the choir’s 20+ year history, including choral favorites from all over the world heard in recent years.

Saturday April 27th 2013 5:45 pm
Grace Lutheran Church
1001 13th Street Boulder
Add to Google Calendar | Download iCal
This performance is for Salon/CU Art Museum, and is not open to the public.