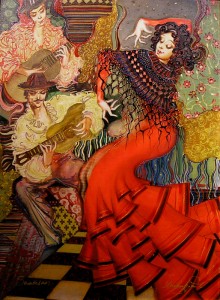 This program will feature Brahms’ colorful Zigeunerlieder and Schumann’s lighthearted Zigeunerleben. Brahms wrote his Zigeunerlieder (Gypsy Songs) based on a collection of twenty-five Hungarian tunes which fueled the appeal of all things Gypsy at the time. The descriptive poetry translated from the Hungarian depicts journeys of love lost and regained, of scenes in the life of these wandering peoples. They are definitely the more exotic counterparts to the Liebeslieder Waltzes, first performed by Cantabile in 2010. Schumann’s Zigeunerleben (Gypsy Life), on the other hand, depicts a gathering of gypsies around a campfire, with a great sense of curiosity and enchantment.

Cantabile will also perform additional beautiful works by Lauridsen, Duruflé, Vaughan Williams and Billings, among others, as well as featuring Stella and Alejandro on Brahms’ slow movement to his third Sonata, a piece written by Brahms at the time of his Gypsy songs. You will also hear the famous Czardas by Monti in its virtuosic version for violin and piano.

Sunday November 4th 2012 2:00 pm
The Stanley Hotel
333 Wonderview Avenue Estes Park
Add to Google Calendar | Download iCal
This performance of Gypsy Living is part of the Estes Park Music Festival Winter Concert Series. Tickets are $7.00 at the door; children and students are admitted at no charge.