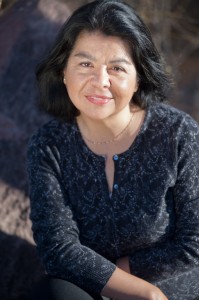 María Teresa Guillén Becerra is a Colombian choral conductor of wide artistic trajectory known particularly for her work in the development of the unique sound of each choir, while providing the singers with tools for finding their vocal identity. She has been a valuable and constant contributor the development and strengthening of the choral activity in Colombia.

She created the National Choral Program of the Colombian Ministry of Culture, and has served as one of its directors, clinicians and permanent advisers, collaborating in the fields of choral conducting and vocal technique applied to choral singing for children and adults. She has led prominent choral organizations at the national and international level such as the Coro Polifónico Benposta, with which she won first prize in the Concurso Polifónico Internacional “Ciudad de Ibagué”. She has been associate conductor of the Coro Nacional de La Opera de Colombia, music director of the Schola Guido D’Arezzo specializing in Gregorian chant performance, and singer and director of the Sexteto Vocal Guillén Becerra with which she recorded a CD of elaborate arrangements of Colombian folk music and Villancicos. She also founded and directed the Coro Infantil y Juvenil of the Colombian Ministry of Culture with which she received high acclaim and recorded two CDs of music from Europe and Latin America, spanning several centuries and styles.

Ms. Guillén Becerra holds graduate degrees in Conducting from the University of Northern Colorado, and in Music Education from the University of Chile. She has studied Gregorian chant with Johannes Berchmanns and Luigi Agustoni in Caracas, and conducting with Helmuth Rilling at the Oregon Bach Festival and in Santiago de Compostela. She has been a guest professor of music at Javeriana University in Bogotá, and will present at the ACDA Conductors Workshop in Denver in January 2012.

“Music by inheritance and by nature…María Teresa Guillén Becerra has been carrying out admirable work in the strictest sense of the word.”
Otto de Greiff, El Tiempo

We can’t wait to share these songs with you! Joi

But tbh we’re all pretty jealous of @bjdstonemus

WEEEEEEE’RREEE BACK!!! We all fought back tears

What a great night!! Cantabile joined together las

O Magnum Mysterium by Morten Lauridsen is one of o