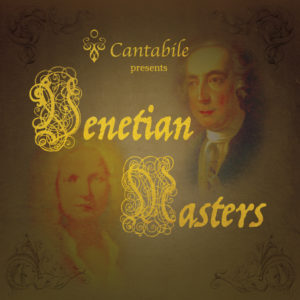 The Baroque era of Western music spans from the late 17th century through the middle of the 18th century. The two composers of this era featured on this concert could easily be considered musical masters of their time and enjoy many similarities: both began their musical training in the hallowed halls of St. Mark’s Basilica in Venice, Italy; both would travel throughout Europe gaining notoriety for their compositions of chamber music, operas, and music for the church; both were named Antonio! The chief difference between the two is found in the popularity their compositions enjoy today. Antonio Vivaldi’s music is heard regularly and we are thrilled to perform his perhaps most well known work, Gloria. In contrast, Antonio Caldara, although not completely unknown, is not nearly as celebrated today despite that he was likely of equal fame during the Baroque era. Cantabile is excited to present Caldara’s Missa Dolorosa. These two works set beautifully together for chorus, orchestra, and soloists. We hope you’ll join Cantabile as we celebrate two masters of the Baroque, one you might know, and the other you might not.